Holy 🐄! What do emojis have to do with my organization’s success?!

Have you seen all the recent buzz questioning the use of emojis in workplace communications? It seems that the use of those colorful little pictures (emojis) is not only causing miscommunication snafus among employees but may also be highlighting a lack of overall cultural awareness and understanding within many organizations. The New York Post dug into a recent debate on Reddit that highlights a growing generational divide causing confusion and misinterpretations when older workers use certain emojis in their professional communications that don’t resonate with (and maybe even offend) younger workers. Emojis can seem fun and are often a quick mode of communicating, especially when so many colleagues now text or respond to emails via their mobile devices. However, emojis can also perpetuate bias and stereotypes, lead to workplace harassment, reveal a lack of accessibility and cultural understanding, and ultimately undermine your organization’s overall success.

We’ve reviewed some recent research and are sharing a few great tips when considering whether to use emojis (or other forms of imagery and symbols) in your personal and professional communications.

Consider your audience. Before sending a text or other communication using emojis, consider what you know about your recipient(s). What are the norms around communication? Do others use emojis freely and how are they received? Is what you want to communicate best said in writing, via a phone call, or some other method? A text message to a close work colleague (I’m bored! 🙄) is very different than sending a text to your boss when you wake up feeling under the weather (Think I caught a bad cold. I won’t be able to come in today 🤮). The use of emojis can be considered disrespectful and may not match up with your workplace’s definition of professionalism. Remember too, that anything you put in writing (yes, even emojis!) creates a communication trail and can be used later in performance reviews, management decisions, and other workplace advancement considerations. Given all that, many experts agree that you may want to avoid emojis all together in the workplace for no other reason than to avoid misinterpretation.

Consider your mode of communication. Text or Slack messaging is typically seen as less formal than a workplace email, memo, or report, and therefore, you may have more leeway in using emojis in those less formal modes of communication. However, recent online debates have pointed out that the danger in using any emoji is that your message’s intent may not match up with the way it impacts others. A simple thumbs-up emoji (👍) may be your way of saying “okay” or “yes, I understand” but to others, it may translate to a passive-aggressive response that to them reads as “yea, sure, whatever” or “I don’t really care about your input”.  Even something as simple as a checkmark (✅) can land on the recipient as an inconsiderate brush-off or overly aggressive response depending on how they interpret the symbol or even how they interpret the color of the checkmark.

Consider accessibility. Not all emojis are easy to read or visible to those with low vision or blindness. Screen readers interpret an emoji by reading a description of the emoji out loud (the picture of the sun is read aloud as “sun”) and so may not convey your true meaning (it’s a sunny day outside). Most emojis are also small, hard to see, and don’t always incorporate contrasting colors so some individuals may truly not be able to see what you are sending. Another point to consider is that not all emojis appear the same across different devices or different software programs. What you send from an Apple device may not be quite the same as what shows up for a Samsung user.

Consider culture. Not all emojis have the same meaning across different cultures and countries. What may seem funny in the US, may have an offensive nature in another country. For example, using the finger-pointing emoji (👉) to indicate where someone or something is located may be seen as rude or inappropriate by certain cultures. Giving the “V” sign (✌️) in the US was initially used to signal victory by Allied nations during World War II and is now often used to convey a message of peace, however that same hand gesture from an outward view is viewed as obscene in other countries equivalent to giving someone the middle finger. Emojis that reference historical events or icons, cultural or religious symbols, and even holiday celebrations can be viewed differently across generations, regions, and locations (⛪😈 ✡️)so be thoughtful when deciding to include these types of emojis in your communications.

Different work teams, departments, and office locations may also have their own distinct workplace “culture” and may use certain slang or abbreviations, or pop culture references that don’t always resonate in the same way across groups. When in doubt, it may be best to avoid the emoji and stick with writing out your message.

Consider assumptions and stereotypes. Remember the finger-pointing emoji (👉) discussed above? This emoji, along with plenty of others, often have a white-centered, male-dominated default (white hands, white faces, heterosexual relationships, male-only representations of many vocations, etc.) Be thoughtful about where you can interrupt those biases and stereotypes with your own communications. For example, consider using an arrow (➡️) instead of a white pointing finger (👉) (tip from feminuity.org). Try looking for non-male dominant emojis that take a more holistic view and challenge societal assumptions, such as a female rather than a male doctor (👩🏽‍⚕️) and a male rather than female nurse (👨🏻‍⚕️). When referring to “the holidays” make sure to look for ways to include emojis beyond Christian dominated celebrations (such as Yom Kippur, Diwali, and Kwanzaa along with the Christmas tree)

In 2015, five skin tone options became available for hand gesture emojis, in addition to the default bright gold-yellow color. It can be helpful for some to select the skin tone that matches their own identity as a way to more closely align their communications with who they are, but for some, and those who identify as multi-racial, it can be a complicated decision.

The world of workplace communications is continuing to shift. Many organizations have moved to 100% remote or hybrid formats and are realizing that communicating in clear and respectful ways must remain a top priority. We encourage you to be thoughtful and model these inclusive communication practices for others in your organization. It’s never too late to build a more effective and inclusive workplace culture! 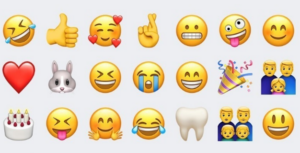