There have been many research studies over the years examining what it takes to create a high-performing team. Some would argue it’s hiring the right people for the job. Others say it comes down to good leadership. And still, others might joke that the formula for creating a high-performing team is more magic than method. While there may not be one set recipe for success, we do know that the chances of building an effective, efficient, and resilient team are greatly increased by helping team members build genuine respect for each other through positive workplace relationships.

In a recent article written for the Harvard Business Review by Ron Friedman, Ph.D., an award-winning psychologist and author of several best-selling books including, The Best Place to Work: The Art and Science of Creating an Extraordinary Workplace, outlines new research findings that offer a few concrete insights into what high-performing teams do differently to be more successful. Below, ADR Vantage delves into these findings and offers a few insights of our own from years of working with clients across the U.S. to help employees and teams “work better together”.

From “5 Things High-Performing Teams do Differently”, below are some top tips.

High-Performing Teams are not Afraid to Pick Up the Phone

“…research found that [high-performing teams] tend to communicate more frequently in general, and are significantly more likely to communicate with colleagues using the telephone than their less successful peers.”

In this tech-savvy world (and among workplaces that were forced to go all virtual or hybrid as a result of the COVID pandemic) we’ve seen more and more teams move away from synchronous communication and lean more on asynchronous modes of messaging like Slack channels, IM, and emails. These less personal and often delayed modes of communication can lead to misinterpretations, miscommunications, and a lack of real-time back-and-forth communication connections that help us better interpret others’ meanings and build stronger workplace bonds. Something as simple as picking up the phone to ask a colleague a question or check in with one of your employees can really make the difference in how connected and effective your team can be.

So, next time you reach over to your keyboard to send an electronic message, think twice about whether it would be just as easy (and have a better impact) to pick up the phone and connect.

High-Performing Teams are More Strategic with Their Meetings

Many high-performing teams have meetings that are more efficient and more collaborative by doing a few specific things. According to research, high-performing teams are significantly more likely to require prework from participants (e.g. preparing summary reports on current projects or collecting and sending out data prior to a meeting), introduce an agenda (one that includes tasks, anticipated timelines, and assignment of roles), and begin with a personal check-in that keeps team members apprised of one another’s progress.

Check out some short tips on creating more effective meetings from our ADR Vantage blog here and here.

Research shows that “high-performing team members are significantly more likely to spend time at the office discussing non-work matters with their colleagues — topics that may extend to sports, books, and family. They’re also significantly more likely to have met their colleagues for coffee, tea, or an alcoholic beverage over the past six months.” This doesn’t mean that to create a high-performing team you have to be in the business of hosting expensive happy hours or forcing folks to take their lunch breaks together. However, it does mean creating opportunities for connections, conversation, and informal exchanges where team members can start to see each other beyond the work they produce together.

Even in a virtual or hybrid setting, or in teams that are highly dispersed, there are tons of creative ways to make space for beyond-work conversations and encourage rapport building that can help colleagues connect to generate greater camaraderie and collaboration.

Money matters but time and again, studies reveal that “recognition is often a more powerful motivating force than monetary incentives.”

Appreciation doesn’t have to come in grand gestures or lofty pay incentives (although those are always nice too!), but can often come in smaller daily acts such as:

You may have heard recent popular catchphrases related to increasing employee inclusion and belonging. Phrases like “we want our employees to be more authentic” or we want everyone to be able to “bring their whole self to work”. While these phrases often sound good and are well-intentioned, it can be hard to know what they really mean or how to achieve the positive results associated with them. Perhaps, what we really mean when we use those phrases is that we want to know how to increase the chance that employees will interact in ways that are honest and transparent with one another, even when things aren’t all positive, while still growing workplace well-being, satisfaction, and overall performance. That’s a pretty tall order! 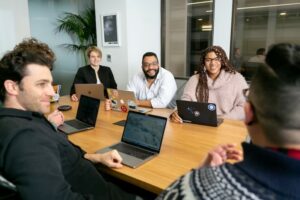 In fact, many studies show that the ability to express both positive and negative emotions with those you work with is critical to fostering a psychologically safe environment. In other words, an environment where it’s okay to critique, question, and speak up, even if your opinion may differ from others, without fear of negative consequences. What the study findings in Friedman’s recent HBR article suggest is that, “to the extent that team members experience the psychological safety to express their full range of emotions with their colleagues, overall team performance tends to benefit.”

Although there isn’t a magic formula for creating a high-performing team, many research studies, and our own experience here at ADR Vantage, tells us that creating opportunities for true connection and authentic relationships among team members is part of the special sauce. By employing some of the tips listed above, you can help employees to see each other as more than just the co-worker in the next cubicle (or virtual square on the screen). In truth, helping team members to foster deeper connections, build relationships with one another, and increase the trust and bonds between them is what makes all the difference between a group of people who work together and a real team.

Please let us know your ideas and experiences with creating high-performing teams by sending us a note at workbetter@adrvantage.com