One of the themes that often comes up in conversations with leaders, whether in one-on-one coaching sessions or in larger team strategic planning meetings, is helping them to figure out how to be most productive in the midst of so much to do! Leaders are always juggling multiple tasks, multiple deadlines, and working with a variety of demands from clients, employees, and teams. When you’ve got a lot on your plate it can be tough to figure out what to go after first to help you and your organization be most productive.

Dwight Eisenhower, 34th U.S. President, Commander of the Allied Forces in WW II and a Five-Star Army General, developed a famous tool (referred to as the Eisenhower Box) that helped him to maximize his own productivity throughout his professional and personal life, that is now taught in management schools and used by many leaders in today’s workforce.

The Eisenhower Box strategy for taking action, organizing, and prioritizing tasks is simple and organized into a four-category design that anyone can use. It incorporates a decision matrix to help you separate and designate your actions based on four possibilities. 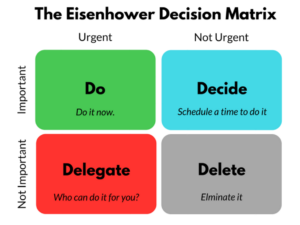 The power of Eisenhower’s method, and likely why it’s been utilized by so many people over the years, is that it forces you “to make hard decisions and delete any task that does not lead you toward your mission, your values, and your goals.” In fact, it helps individuals recognize the power of focusing on what’s important and essentially, get rid of the rest. That doesn’t necessarily mean “the rest” is not relevant or needing of attention at some point, but it may not be the most important to you, right now to get you to where you want to go. Although all decision-making tools and strategies have their flaws, the Eisenhower Box is one approach that can be helpful in determining where you shouldn’t waste your time, energy, or resources and where you do need to focus to be your most productive right now.

For more insightful tips on the Eisenhower Box and other decision-making tools, check out this great article from the author of Atomic Habits, James Clear, How to be More Productive and Eliminate Time Wasting Activities by Using the “Eisenhower Box”